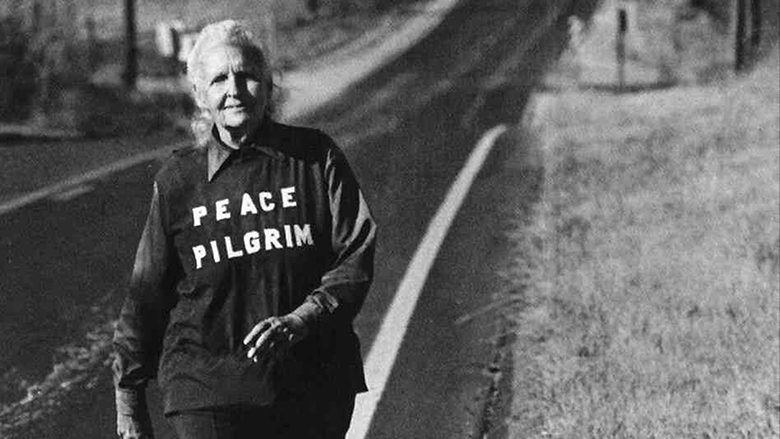 Peaceful protest, or nonviolent resistance, is the practice of achieving goals such as social change through symbolic protests, civil disobedience, economic or political noncooperation, or other methods, without using violence. This type of action highlights the desires of an individual or group that feels that something needs to change to improve 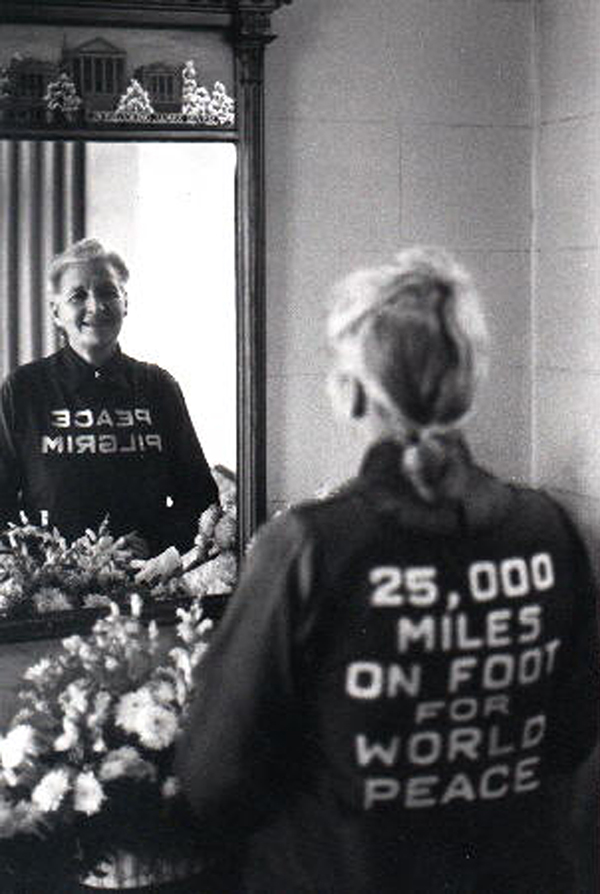 the current condition of the resisting person or group. The modern form of this kind of demonstration was popularized and proven to be effective by the Indian leader Mahatma Gandhi in his efforts to gain independence from the British beginning in 1930.

Much closer to home, New Jersey had its very own peaceful protester, a woman named Mildred Lisette Norman, or Peace Pilgrim, as she would become known, who began an epic 25,000 mile journey for pacifism in Egg Harbor City. A decade before Dr. Martin Luther King, Jr. organized and led his historic civil rights marches across the South, Peace Pilgrim was traipsing the trails, turf and tarmac of the Garden State and beyond, delivering her message of pacifism and spirituality to all those along her route.

Norman was a non-denominational spiritual teacher, mystic, vegetarian activist and peace activist. In 1952, she became the first woman to walk the entire length of the Appalachian

Trail in one season. Starting on January 1, 1953, she adopted the name “Peace Pilgrim” in Pasadena, California, and began walking across the United States. The walks continued for the next 28 years. She stopped counting miles 1964, having walked more than 25,000. She eventually walked across the United States at least eight times, though some believe that the actual number of her cross-country trips was more than 20.

Born July 18, 1908 on a poultry farm in Egg Harbor City, New Jersey, Norman’s mother was a tailor and her father a carpenter. Although the family was poor, they were they were well respected in their German immigrant community. Norman graduated from Egg Harbor High School and worked as a secretary at Renault Winery, America’s oldest continually operating winery. After a failed marriage ended in 1946 she entered a period of several years of quiet contemplation, before embarking on a journey that would last the rest of her life.

In the book, “Peace Pilgrim: Her Life and Work in Her Own Words”, Norman related that her physical journey began after having experienced a “spiritual awakening”, following a long period of meditation practice. She said that this awakening was a direct, mystical experience of the creator’s love. She claimed that this spurred her to then start her decades-long walking journey.

Her pilgrimage began as the country was embroiled in the Korean War. She continued walking for nearly three decades, spanning the American involvement in the Vietnam War and beyond. Peace Pilgrim was a frequent speaker at churches, universities, and on local and national radio and television. 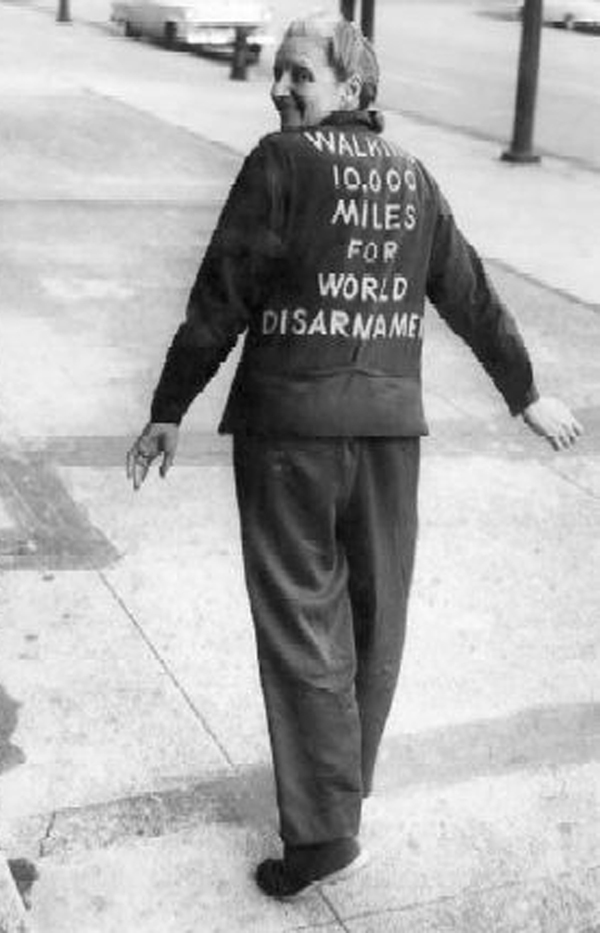 Her only possessions were the clothes on her back and the few items she carried in the pockets of her blue tunic, which read “Peace Pilgrim” on the front and “25,000 Miles on foot for peace” on the back. She had no organizational backing, carried no money, and would not even ask for food or shelter. When she began her pilgrimage she had taken a vow to “remain a wanderer until mankind has learned the way of peace, walking until given shelter and fasting until given food.”

“In order for the world to become peaceful, people must become more peaceful. Among mature people war would not be a problem – it would be impossible. In their immaturity people want, at the same time, peace and the things which make war. However, people can mature just as children grow up. Yes, our institutions and our leaders reflect our immaturity, but as we mature we will elect better leaders and set up better institutions. It always comes back to the thing so many of us wish to avoid: working to improve ourselves.” –Peace Pilgrim 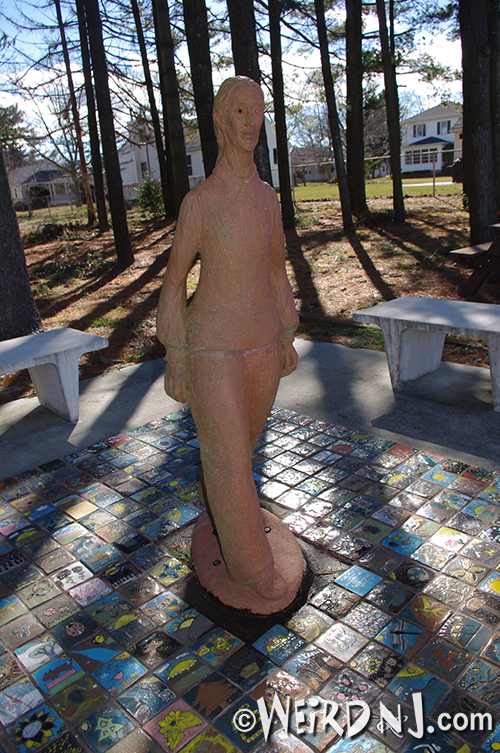 On July 7, 1981, while being driven from the Chicago, Peace Pilgrim and her driver were killed in a head-on automobile collision while on the way to a speaking engagement in Knox, Indiana. After her death, her body was cremated, and her ashes were interred in a family plot near Egg Harbor City, New Jersey.

Friends of Peace Pilgrim (peacepilgrim.org) is an all-volunteer non-profit organization dedicated to making information about the life and message of Peace Pilgrim available freely to all who ask. Since 1983 they have published and distributed over 400,000 copies of the book, Peace Pilgrim: Her Life and Work in Her Own Words, and over one-and-a-half-million copies of the booklet, Steps Toward Inner Peace. Books and booklets have been sent to over 100 countries. The book has been translated into 12 languages and the booklet into over 20 languages.

In 2005 Peace Pilgrim Park was created in her hometown of Egg Harbor City, on the site of the former Neutral Water Health Resort Sanitarium (see Weird NJ issue #40). Since 2007 an annual Peace Pilgrim Celebration has been observed in the park and at sites throughout Egg Harbor City each September.

“This is the way of peace: Overcome evil with good, and falsehood with truth, and hatred with love.” –Peace Pilgrim 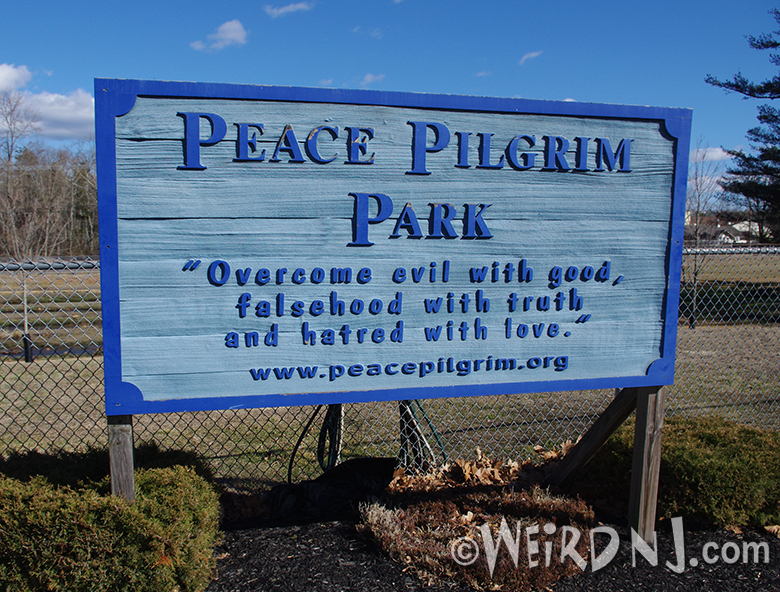 The preceding article is an excerpt from Weird NJ magazine, “Your Travel Guide to New Jersey’s Local Legends and Best Kept Secrets,” which is available on newsstands throughout the state and on the web at www.WeirdNJ.com.  All contents ©Weird NJ and may not be reproduced by any means without permission. Weird NJ photos by Mark Moran.