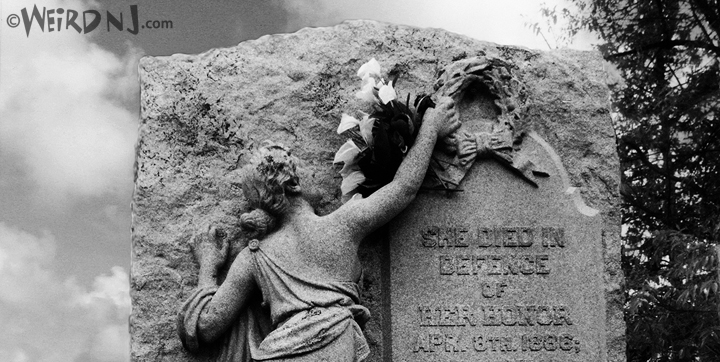 Centenary College was founded by the Methodist Episcopal Church in 1867 as a preparatory school and women’s college. It underwent several incarnations before becoming a four-year, co-educational institution in 1988. 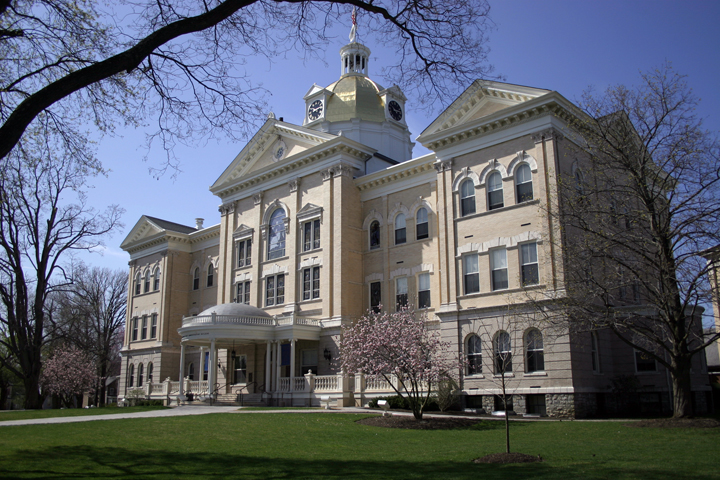 In 1886, when the school was still known as Centenary Collegiate Institute, an 18-year-old kitchen maid named Tillie Smith was found murdered in a field behind the school. Apparently, on the day of her death, Tillie (who boarded at the school while working in the kitchen) had asked janitor James Titus if he would let her into the building after the 10 p.m. curfew, as she had plans to stay out late at a local theater performance. But instead of letting her in upon her return, he attempted to rape her and strangled her to death in the process. He was later convicted of the crime and served 17 years in prison. 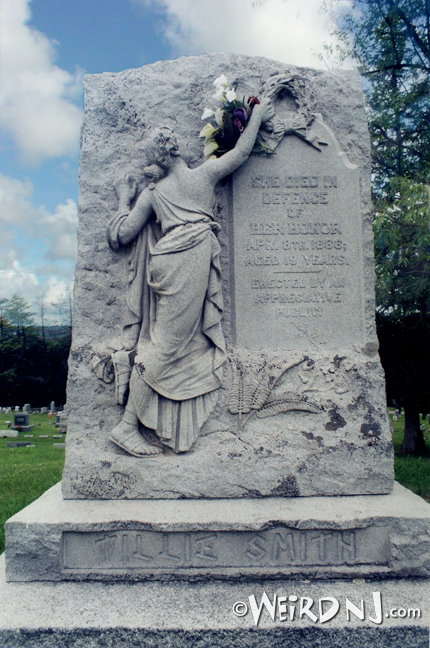 Tillie’s valiant struggle to protect her virtue immediately became the talk of the town, and locals contributed money to provide her with a proper burial (initially, she had been buried in a pauper’s grave). A marble monument was erected in Union Cemetery with this simple epitaph: “She died in defense of her honor.”

Tillie’s reach still looms large, with frequent ghost sightings and even a play about her commissioned by the Centenary Theater in 2002. Today, Centenary’s on-campus grill, where students can get a snack or a Starbucks coffee, is called Tillie’s. Coincidence? We think not.

Tillie’s ghost is often sighted walking through the tall oak trees on the college grounds. Other sightings have been reported in various parts of the school. Some people have seen her floating on the ceiling at the South Hall.

Tillie’s favorite place is the theater. Students have seen her in a back room behind the stage. On one occasion, a repair man came to fix a light in the sound room and was reaching for a tool when all of a sudden the light fixture started swinging and a voice came from it saying “Get me out of here.” The repairman never came back. –Karen M

A Fleeting Glimpse of Tillie

I went to Centenary College in Hackettstown and many people, including myself, had a Tillie encounter there. Tillie appears in a Sigma sorority picture taken a couple years after her murder, but the sorority keeps this under lock-and-key. Raped and murdered by a janitor in a backfield, her ghost appears across campus. Apparently she occasionally pulls pranks on people, opening doors, moving things, turning on stereos. I myself have witnessed a couple stereos and CD players turn on by themselves. People have seen strange activities in the chapel on the third floor of the Seay building. 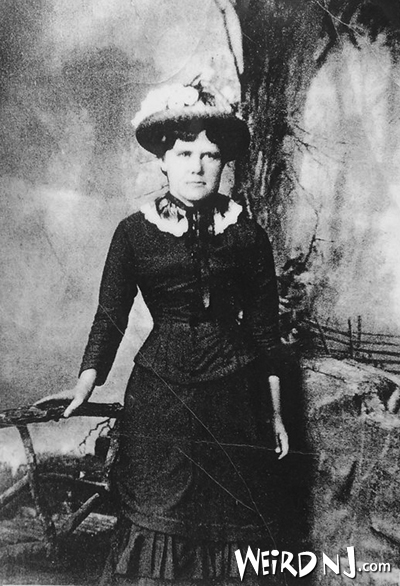 My own encounter with Tillie happened when my friend Eric and I were working in South Dorm one day as part of our work-study, patching holes in the walls and painting. The dorm was not in use at the time because of electrical and heating problems. You had to get a key from the dean in order to get in, so we were the only

ones who could have been in there that day. Yet, from where we were on the first floor we kept hearing footsteps on the second floor. It freaked us out, but we decided to investigate. No one was up there, but the sound of footsteps moved to the third and last floor. We ran up the stairs to try to catch whoever it was, but all we saw was a shadowy form rush down the hall. The hall was curved, kind of like a horseshoe, and the figure rounded the curve, disappearing into the shadows just as the hall lights went out! We ran out of there, never to return by ourselves again. –Rick C.

I was a student at Centenary College back in 2002 before joining the Air Force. At the time, I was a majoring in theatre and would often work many late nights in the theatre. One night, we were working a late show and we needed to borrow a small cross from the church (which is inside the main building).

my way out of the theatre, I ran down between the pews and placed the cross back on the table I had taken it from before the show. Then, all of a sudden, the lights to the church turned on. I looked around and called out to my friend to see if she had come upstairs. But there was no response, so I worked my way up between the pews and headed toward the door.

Not wanting anyone to get the better of me, I walked up the stairs to the doors, which led to the upstairs pews. It was locked. So I walked around to the other door, which was locked

as well. By this point I was starting to get a little freaked out, so I went downstairs to find that the whole cast and crew were all gone and the assistant stage manager had already left. This ruled out a prank because it was about midnight when this happened and short of my director and my stage manager, who left right after the performance, no one left on campus would know I was there, or if so, how did they get in without my knowing about it? –Eric