The Mummies of Newark

Story and photos by Scott Warnasch

Most people would find it weird that a church would pave over its own historic cemetery to create a parking lot.  To some, it may seem sad, the cemetery was one of the oldest in the state and contained members of the founding families of Newark, who settled the town in the 1660s.  Some might be disturbed to know that most of the 2,000-plus graves in the cemetery were not removed prior to paving the parking lot in 1959. Hockey fans may be a little shocked to learn that the former cemetery was located directly beneath the home ice of the New Jersey Devils.  However, what archaeologists found completely surprising were the two cast iron, Egyptian-style sarcophagi discovered while excavating the graves from the footprint of the hockey arena.  Based on their designs, both coffins date to the early 1850s, a little more than 100 years before the headstones were removed and the area was paved. Although of a similar design, one of the coffins was smaller than the other and was found in a different area of the cemetery.

The cemetery was used from the late 1700s to the late 1800s, and the headstones documented several generations of the Puritans who had moved to Newark from Connecticut and eastern Long Island with Captain Robert Treat in 1666.  In fact, the cemetery property was originally owned by Captain Treat. Names familiar from street signs all over Essex County, such as Baldwin, Crane and Tichenor, were inscribed on the buried and forgotten stones adorned with angel of death motifs.

Iron sarcophagi were patented in 1848 and became more widely available in the early 1850s, especially after First Lady Dolly Madison was buried in one in 1849.  The early sarcophagi, like the two discovered in Newark, were cast in the form of a shroud-draped sarcophagus similar in shape to King Tut’s, but instead of a face on the lid, a viewing window was constructed so loved ones could see (but not smell) their dearly departed.  A metal plate was bolted over the window before burial.  Over time, the shape of such caskets evolved into a simpler, torpedo-shaped design.

Before modern embalming practices were perfected, the iron coffin provided one solution to the new industrial age problem of long distance transportation of the dead. Since the advent of the railroads and steam ships, and thanks to the Gold Rush, more people traveled much farther into the opening frontiers of the new nation. As a result, many more people died farther from home and family than ever before.

The transportation of human remains back from the new territories became a sticky issue. Lead and zinc-lined coffins had been around for centuries; however, they had proved impractical in many situations.  Fortunately, the same cast iron technology that created the steam boilers that allowed people to go off and die in distant territories was also used to develop the new, lighter, “metallic burial case” to bring them back home. By the time of the Civil War, the need for sanitary shipping containers for the dead became obvious and iron coffins grew more commonplace.  Although the fancier sarcophagi were expensive and an obvious prestige item, they could also be reused if necessary.

Previous discoveries of iron coffins have proven that in some situations, if the conditions were right and the burial case sealed properly, the sarcophagi could preserve the dead similar to their 4,000-year-old predecessors in Egypt.  As soon as the Newark cemetery archaeologists recognized what they had discovered they contacted experts regarding the preservation of iron coffin mummies. 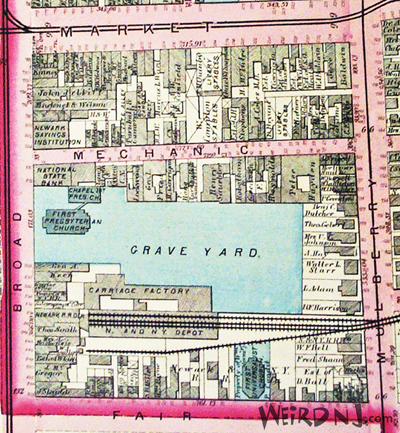 What should be done with these rare pharaonic anomalies was not immediately clear.  Should they be opened and the bodies cremated and reburied like their 2000 + fellow towns-folk or could they be studied before reburial?  After years of negotiations among the interested parties, permission was generously granted to study these two unique residents of Newark. A team of experts assembled whose specialties include skeletal analysis, ancient diseases, toxicology, archaeology, genealogy, metallurgy, and clothing and fabric analysis.  Upon opening the coffins, the team found that the larger of the two sarcophagi contained an adult male. The nameplate on the lid was dated September 1854. The smaller, undated, sarcophagus contained a tiny woman with a lace bonnet over her braided and coiled hair; she had the stem of a flower still pinned to her burial shroud.

Research and analysis is ongoing, and through this multidisciplinary effort it may be possible to uncover facts about the lives of the long deceased, such as where they lived and worked, their families, their place in the community, even some of their aches and pains, as well as possibly their cause of death.  Studying the lives and deaths of these pre-Civil War time travelers offers a glimpse into a forgotten sliver of time when the city of Newark was a high-tech center of the industrial revolution, filled with inventors and the promise of a better, more modern life, albeit, a time before parking lots.